Prize Informant was purchased at the 2019 OBS Winter Mixed Sale as a part of the JD Farms dispersal.  She is a Stakes winner and multiple Stakes Placed mare.  She has a 2016 colt by He's Had Enough in training at Gulf Stream Park, a 2018 colt by Chitu. Her He's Had Enough baby is now a gelding named Starship Aramis and in only 4 starts has had a win, a second and a third!  He is a very promising horse for sure!

On April 28th, 2019 she foaled a gorgeous filly by the Candy Ride son, Valiant Minister.  Her name is Valiant Miss, and she is an absolute doll!

We recently purchased this beautiful daughter of our very own Ballyhoo Kat at the Fasig Tipton sale in Lexington, Kentucky.  She will live the good life as a broodmare at Rivermont.  We are so excited to have her join our family!

Ballyhoo Kat was recently purchased at the January 2018 OBS sale.  We love the Storm Cat line and are so excited to now own a Storm Cat daughter!  Her dam, Sharp Lisa, was a multiple G1 and G2 stakes winner.  She came to us with a brand new beautiful bay filly by her side by First Dude who is known for coming in 2nd place in the 2010 Preakness Stakes and 3rd in the 2010 Belmont Stakes.

Her First Dude filly has been named Faith's a Bluebird and we are absolutely head over heels in love with her! 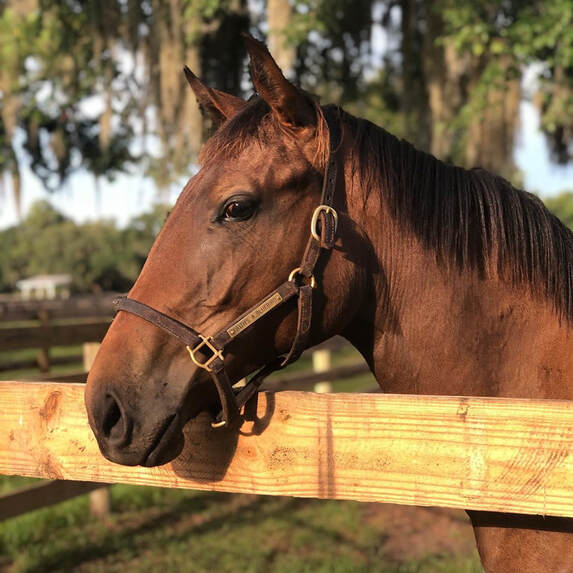 Faith foaled on January 14th, 2018 at Double Diamond Farm in Ocala.  We purchased this filly along side her dam, Ballyhoo Kat.  This filly is getting more impressive every day!  She's not only got the look, but an amazing disposition to go with it! 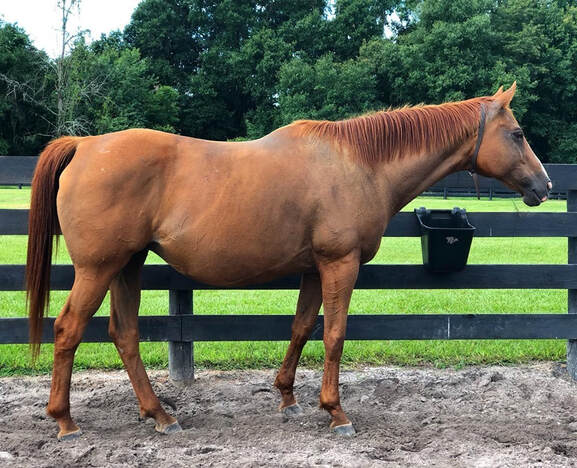 Nacho Polo was purchased at the January 2018 OBS sale and we couldn't be happier to have her join our family!  She is impeccably bred with A.P. Indy as her sire, and equally as beautiful!  Nacho foaled a beautiful colt by Bahamian Squall on March 12, 2018.  Nacho Polo has had 4 babies race and all 4 have been winners!  (Polo Art, Red Machine, Nacho Giant and Irish Polo)  Click here to view her current progeny standings: https://www.pedigreequery.com/progeny/nacho+polo 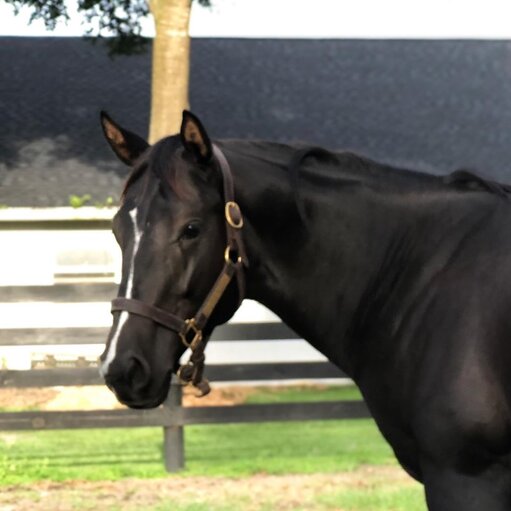 This colt just gets nicer and nicer every single day!  "Chip" as he is known, was born on March 12, 2018.  He has been handled since birth and is a sweetheart.

His dam, Nacho Polo, is a producer of nothing but winners!  4 to race and 4 winners including Polo Art who's earnings are currently at over $206,000 and Irish Polo, a 3 year old who in his first year of racing has earned over $60,000.  These two boys have won their last 6 races in a row combined!  We expect great things from Nacho Supreme!

He is currently in training at Six K's Training with Scott Kintz.
​

Shesgotthemoves retired from a very successful racing career with 69 starts!  She was in the winners circle 17 times with earnings of $273,353.  A very big (close to 17 hands), sturdy and sweet mare, her owners and trainer felt she had earned a loving retirement which she has here at Rivermont.

She has the same sire as our beloved Buck The Attitude whom we lost on Christmas Eve 2017.  We found Shesgotthemoves at a track in Pennsylvania just a few days after Penny died and contacted her owners, asking that they let us know when she was ready to retire, which they did and we are thrilled to have her!

She will be bred in 2020, however the stallion has not been decided just yet.

Claire is an off the track Thoroughbred who recently retired from a successful racing career.  We picked her up in New Orleans on November 24th, 2015.  Her breeder is Adena Springs and  her final race was at the Fairgrounds in New Orleans on November 22, 2015. She and Ashley competed in the RRP Thoroughbred Makeover in October 2016 in Lexington, KY where they came in 8th in the Nation in the Show Hunters out of 70+ horses!

Be sure to check out Claire's page by clicking here! 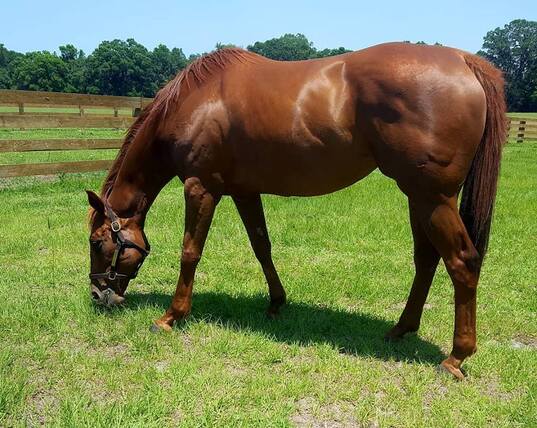 Dagney's Revenge was sent to us once she retired from racing, and our original plan was to turn this beauty into a show horse.  However, after the tragic loss of our mare Buck The Attitude (who was in foal to Chitu) on Christmas Eve, we have decided to breed this beautiful big mare to Chitu in 2018. 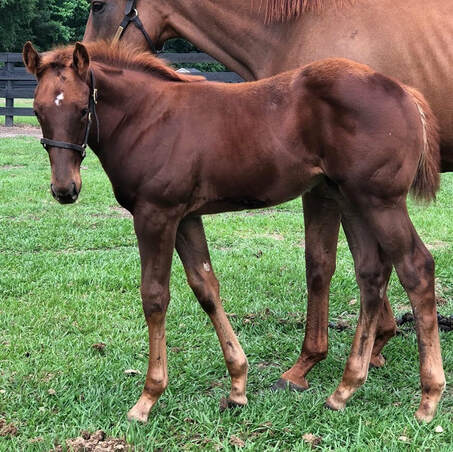 Miss Bluebird is an exception physical and we are quite proud of this first baby from our mare Dagney's Revenge!  Tentative plans are for her to be sold through the January 2020 sale at OBS.

This gorgeous filly is the pride of Rivermont!  She is the first foal by our stallion, Twister, and was out of a Thoroughbred mare that was a Secretariat granddaughter.  Hope's dam was also a sister to our late Kaiser Fritz.  We lost Hope's dam in July of 2011 to EPM.  Hope is a gorgeous bay with 4 white stockings and has the best personality of any foal we have ever had!  She would come in the house if we would let her! 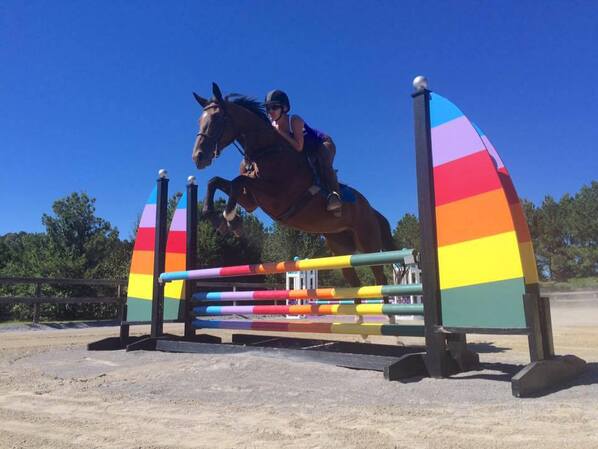 Halo is one of our off the track Thoroughbred's. She actually arrived on Ashley's birthday, 8/8/14!  Halo was bred in Arkansas by Flying Frost Stables and after a brief racing career sustained a minor injury.  She has made a full recovery and is currently in training to be a jumper.  She is very athletic and loves to jump! We showed her in the fall of 2015 in Ocala where she was Reserve Champion in the Hunter Classic.

Halo in her racing days!

Match Made In Heaven
aka "Jose'"
Welsh Pony Gelding

Jose's official owner of course is Gracie McDaniel, the daughter of the owner of Rivermont, but he's still a part of the Rivermont family.  Gracie has won plenty on Mr. Jose, and this wonderful pony will be a part of our family forever!  He has quite the show record in the Pony Hunter's.

"Penny" is by Alajwad, who is a son of the famous Storm Cat.  (pictured below on far right...and we think she looks just like him!)  She has famous Thoroughbred lineage such as Affirmed, Secretariat, Mr. Prospector and Buckpasser.  We have owned her since she was a yearling and have shown her successfully in the hunter ring.  She never raced.

Penny is in foal to Chitu, who is standing stud at Bridlewood Farm in Ocala, FL.  Chitu ran in the 2014 Kentucky Derby and was undefeated up to that point!  He is by Henny Hughes who is the sire of the great Beholder.  We are super excited to see what these two will produce next year!  Chitu is pictured in the first two photos below.

We are so sad to report we lost Penny and her beautiful unborn chestnut colt who we had already named Bluebird on Christmas Eve, 2017.  We feel as though a giant portion of our hearts have gone to heaven with them.  This is by far one of the most heartbreaking losses for me that I have ever experienced.  I loved Penny as though she were my child.  Bluebird was perfect...3 stockings, a sock and a blaze, but it was just too early for him to live outside of his mama who put up a huge fight to live.  I know they are in heaven with my dad and I will be reunited with my loves again.

CHITU
This page is dedicated to the memory of my father, Roger Godwin, who thanks to him allowed me to follow my dreams as a horse loving little girl.  He not only purchased my first horse, Sultan, for me in 1985, he always supported my "horse habit" with a smile.  Sultan passed away at Rivermont in 2012 and Dad passed away in March of 2013.  Farm life isn't the same without him.